There’s a bit of a vibe in evolutionary anthropology/biology/theory that the evolution of cooperation is puzzling. A recent book — The Moral Brain — says “cooperation between unrelated individuals poses a puzzle from both the perspective of natural selection and that of rational self-interest”. Still there are loads (and I mean *loads*) of theoretical models showing a variety of ways for cooperation to evolve. In a moment of heightened procrastination, I decided to delve into the literature and find out just how puzzling scientists find cooperation (warning: this is not even remotely a scholarly piece of work).
END_OF_DOCUMENT_TOKEN_TO_BE_REPLACED

I spent an enjoyable couple of days last week in the beautiful Wellcome Trust taking part in a data/text mining workshop run by The Content Mine.

The idea behind their project is to develop tools that help scientists and other interested sorts pull data from published articles, potentially on a large scale. If you want to learn more, all their presentations are online, as are the materials from the Wellcome workshop.

The second day was a hackday. For this, my team wanted to build on the ContentMine tools to create something that helps you explore the scientific literature and find connections between papers you might not otherwise have found. We thought it would work something like this:
END_OF_DOCUMENT_TOKEN_TO_BE_REPLACED

My very first contribution to the collected sum of human knowledge has just been published in the Journal of Evolutionary Biology. The paper is called: “A Dynamic Framework for the Study of Optimal Birth Intervals Reveals the Importance of Sibling Competition and Mortality Risks” and you can read it online or download a PDF. I’ll talk about the main results in this post.

END_OF_DOCUMENT_TOKEN_TO_BE_REPLACED

I reviewed last November’s Crick Lecture at the Royal Society on behalf of BioNews. Dr Duncan Odom spoke about mammals, genes, a branch of biology called ‘comparative functional genomics’ and how we all owe everything to tiny shrews. I also took the opportunity to have a moan about simplistic sloganeering and the rights of marginalised forest-dwelling people. Have a read.

Under the sudden weight his neck cracked a little like the shutter-release button.
Not the weight of stories or self-aggrandised memory or shit like this:
the straight-down weight of a 1971 Russian-made SLR
(no matter he thought it was the same age as his father).
She focussed slowly then became a blur, a sunset on a plain.

For the occasion he wore his best 58-mil lens: factory-standard,
actually, but there’s no need for her to know. He held it to her.
The smell of the ageing leather case threw her to a world of a father,
breath of American lager, cigars, a green recliner and a fire.
She tossed it back, tossed off her pants, let her arch punctuate a question mark.

By chance the bottom of the case still held his father’s ‘Property Of’ label,
in gold, in larger font, above his, punctuated by a full stop.
The weight on the wrist at this angle hurt. He aimed again, her sunset fell
behind the night curtain shutter only to rise one hundred and twenty five
milliseconds later. He thumbed the winder, finding nothing to spool,

no film for the sprockets to chew, and his eyes – wide, stark – shuttered on bulb
for an unfocussed time, gulping images onto the reel of his
mind: thoughts of all those times lost, all those eternities dismissed
with each flick of that switch; not even memories now: events, without
a chance to become fading antiques coated in their tears, dust and grease.

He opened his eyes. She’s still naked, still there, more an imperative now
than an indirect, seductive question.
The mirror behind her
and the mirror behind him juggled the couple for an era
he just couldn’t muster and, wishing for film, he pressed on the plunger:
an inrush of light puffed off the back of the camera. Nothing was preserved.

Neanderthals are cool. They cared for sick and elderly, buried their dead (possibly with funeral rites), wore clothes and jewellery, made art and had sex with our ancestors.

I wrote an article for Shot of Science about how our perceptions of Neanderthals has been changing since their remains were first discovered in the 1800s (before On the Origin of Species, incidentally).

Have a read here.

I was one of three people selected to pitch to real-life science editors in a Dragons’ Den-style session. My idea was to write an article about the increasing prevalence of shortsightedness (myopia) around the world. Scary stat: nearly one in three people might not have 20/20 vision by the year 2020. I didn’t get commissioned but you can watch the video here anyway.

After that intimidating experience, I reviewed two sessions. The first was about the use and misuse of statistics in science journalism:

“The Statistics in Science Journalism session at UKCSJ 2014 was a head-on collision between passionate journalists and the confusing monstrosity that is statistics. Deborah Cohen, the BMJ’s investigations editor, produced this session to help us understand how not to get things wrong.

Ivan Oransky, vice president of MedPage Today and co-founder of the excellent Embargo Watch and Retraction Watch blogs, led proceedings by taking us on a slide-by-slide journey through a realm of shoddy studies and equally shoddy reporting.”

Oransky’s presentation should be on his SlideShare page, but I couldn’t find them just now. He has plenty of other deeply interesting things on there, though.

The other session was about the issue of reproducibility in science:

“Science is in crisis, they say. Negative results don’t get published, while gibberish occasionally does; shaky studies are under-powered and over-reported; peer reviewers miss obvious mistakes and accept results that agree with their biases, regardless of merit; field-defining results cannot be replicated.

The current culture of ‘publish or perish’ doesn’t help matters. A scientist’s worth is judged based on how many papers they publish, how many times those papers are cited, and how much money they pull in.

Scientists, science journalists and others are beginning, however, to rage against the machine.”

Professor Chris Chambers, one of the speakers, put his excellent presentation about pre-registering studies, replicating them and making data open online here. 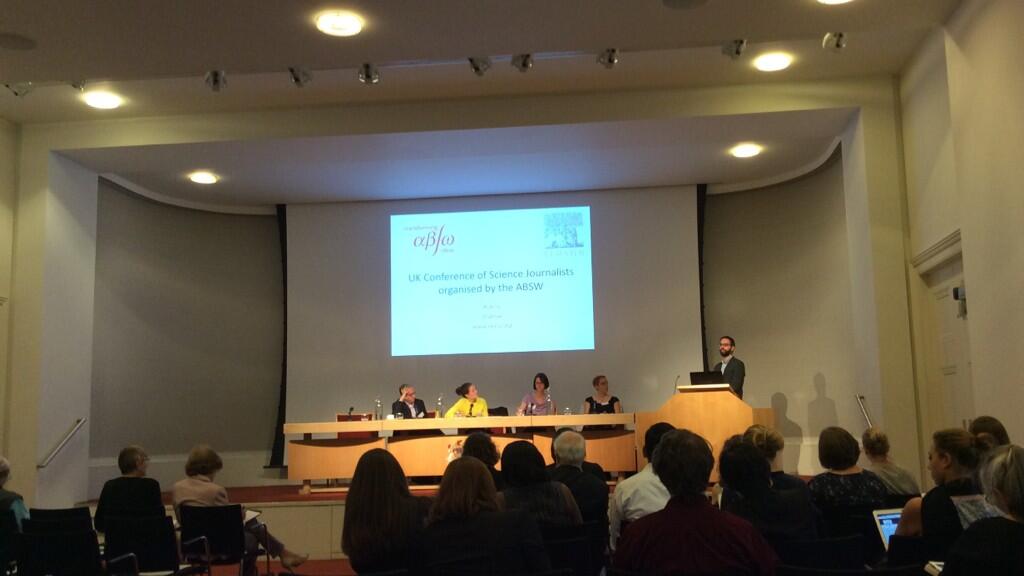 This month, I scribbled 50,114 words for National Novel Writing Month. I haven’t re-read what I wrote so assume it’s mostly tedious drivel. In lieu of forcing anyone to read it, here’s a word cloud summary of the book.

My first article for SciDev.Net — a site about science and technology in global development — is out. I wrote about a journalist who’s using drones (or Unmanned Aerial Vehicles) to cover stories in Kenya.

The roof of the world, north of the Himalayas, stretches over two and a half million square kilometres. It is inhospitable, arid and permafrosted. When it rains, it mainly hails. It’s the highest place on the planet where you can stand on flat ground and be near the heavens, and standing there will thicken your blood. Unless you carry the EPAS1 gene.

This gene stops you over-producing haemoglobin – the oxygen-carrier in red blood cells. Too much haemoglobin raises blood pressure and, with it, the risk of stroke, among other bloody things.

This gene came from an ancient, extinct subspecies of human called the Denisovans. We know this because scientists sequenced Denisovan DNA four years ago. This DNA came from a fragment of a pinky and two teeth found in a cave.

The ancestors of today’s Tibetans had sex with Denisovans. Genes were passed around. The useful ones remained. This allows Tibetan people to survive on the roof of the world.

I wrote about the science for this week’s BioNews. Have a read.

"It seemed a little too pat. It had the austere simplicity of fiction rather than the tangled woof of fact."
— Raymond Chandler, The Big Sleep

These are the blog-like thoughts of Matthew Gwynfryn Thomas, who is an anthropologist and writer.